Guatemala: Digging Up the Past 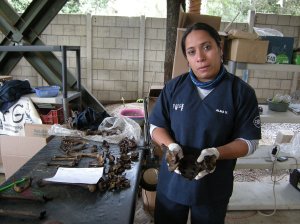 Fredy Peccerelli considers himself lucky. His family was able to leave Guatemala during its long internal conflict. He grew up mostly in New York City, planning to become a doctor, at his father’s urging.

But the problems of his homeland were not far from his thoughts. At Brooklyn College, he switched from pre-med courses to physical anthropology so he could become a professor who explored the ancient ruins in Guatemala’s jungles. Then he attended a conference on human rights and exhumation, saw the slides of graves and changed his life completely.

First published in February 2014 as the third in a series of four articles on tutawaza.com.

“It was as if I was struck by lightning,” he said during an interview at his office in Guatemala City, the capital. “I knew what I wanted to do.”

Peccerelli says that when he arrived in Guatemala, in 1992, land mines and gun battles were constant dangers. Laughing at himself, he says he wasn’t too pleased about the snakes, tarantulas and dengue fever either.

But the work that had called to him was very serious. The UN-backed Commission on Historical Clarification determined that 669 massacres had been committed during Guatemala’s 1960-1996 armed conflict. The commission’s 1999 report blamed the military and its allies for at least 626 massacres and for 91 percent of the human rights violations, which included 160,000 deaths and 40,000 forcible disappearances.

Investigating those crimes, which many powerful people did not want unearthed, required a level of forensic science not yet available in Guatemala. That’s what Peccerelli set out to build.

“I credit the way we expanded – under the radar – for why no one would have interfered until it was too late and we were too big,” he said. In 1997, Peccerelli founded the nonprofit group Guatemalan Forensic Anthropology Foundation, FAFG. 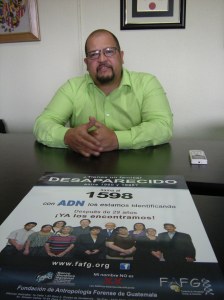 Human rights defenders began to gather names and details of massacres before there was any chance of prosecuting Guatemala’s leaders and security forces for atrocities. They faced grave risks. Both the Guatemalan anthropologist Myrna Mack Chang and the Roman Catholic Bishop Juan Jose Gerardi were assassinated for their investigations into human rights abuses – Mack in 1990 and Gerardi in 1998. The Inter-American Court of Human Rights ruled that government forces killed Mack; Guatemalan courts convicted three military officers of Gerardi’s murder.

Marcie Mersky, director of programs at the International Center for Transitional Justice, in New York, said that human rights defenders in Guatemala had proved the need to “document when you don’t think trials are possible.” Their “ant-like work” contributes directly to trials and other achievements today, she added.

“I think it’s wonderful, amazing that these human rights cases are going forward. To the victims, it is outrageously important,” Mersky said. “It’s a good thing in itself that these cases are coming,” she added, though it may not be a sign of larger changes in society.

In the early 1980s, the most intense period of the conflict, filmmakers Pamela Yates, Tom Sigel and Peter Kinoy interviewed the military dictator, General Efrain Rios Montt, and persuaded both the rebel forces and the military to let them film their activities. Their 1982 documentary, “When the Mountains Tremble,” also featured indigenous activist Rigoberta Menchu, who was later awarded a Nobel peace prize.

Yates, Kinoy and Paco de Onis have produced two recent projects on Guatemala. Their 2011 film “Grantio: How to Nail a Dictator”  tells of Spanish lawyers who sought to bring Guatemalan leaders to trial, of current prosecutions and of the value of their interview with the dictator as evidence against him.

In 2013, they released “Dictator in the Dock,” a series of 23 segments, with teaching materials, on the 2013 trial of Rios Montt. He was convicted of genocide and other crimes, but Guatemala’s Constitutional Court annulled the verdict on technical issues; retrial is expected in 2015.

The 2005 discovery of a trove of police records from the conflict era has already aided in legal cases. Scholars and activists have digitalized more than 10 million of these documents, which the University of Texas hosts in the Guatemalan National Police Historical Archive.

The Open Society Justice Initiative launched “Judging a Dictator: The Trial of Guatemala’s Rios Montt,” a series of articles on the legal case.  The International Crisis Group reports regularly on justice issues in Guatemala.  And the Human Rights Data Analysis Group has supplied the Guatemalan prosecutor’s office with statistical evidence.

Peccerelli’s forensic team, which works closely with the prosecutor’s office, has provided evidence for numerous cases. FAFG works extensively in two types of circumstances: “closed contexts” in which the site and victims of a massacre are known and “open contexts” where, as Peccerelli says, they have remains but not identities. The latter involves painstaking work to determine who the victims were and to match them with relatives and records. There is no list of the 200,000 dead or missing. 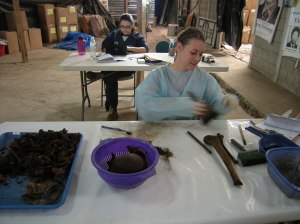 Since 1992, FAFG has completed 1,461 investigations in “closed contexts,” mainly rural massacre sites, and has found the remains of at least 6,987 individuals, as of January, according to Marte Myhre Tunheim, Peccerelli’s technical assistant. In recent work at a former military site, it has recovered 533 bodies, and has identified 24, with 10 other identifications in process.

Remains of conflict victims are likely intermingled with those of the poor in common graves at La Verbena, a major cemetery in Guatemala City. So far, FAFG teams have unearthed and catalogued the remains of 15,559 individuals there, Tunheim said. FAFG believes that 889 of them, about 5 percent, may have been among the “disappeared” because of evidence such as death by gunshot or other wounds during the worst years of the conflict.

FAFG has launched a National Genetic Bank to gather information from survivors and match it with DNA from victims’ remains. The database is national, Peccerelli noted, only in the sense of nationwide; the government is not involved.

He gave an example of how it has helped: Siblings who had lost a brother came forward because of the work at La Verbena cemetery. The database linked them, instead, to remains found at the military site, and a military diary from that site linked to other identifications.

Peccerelli says that FAFG does not pursue perpetrators – evidence does. “We are sitting in a position where we can jeopardize a lot of people for wrongdoing,” he said. “That’s not what drives us. What drives us is the families living this for 30 years.”

FAFG has cataloged the bones of more than 15,000 people at La Verbena cemetery in its search for Guatemalan conflict victims. Photo by Barbara Borst

He said he used to think of the work as bringing “closure” to families that had lost loved ones.

“But the family doesn’t actually get closure. They become empowered,” he said. They decide for themselves how to respond to knowing the truth, whether to prosecute, to rebury, to speak out or to remain private.

“For me, this is a real sign of progress,” he said. “You have people who were completely invisible because their family disappeared. Now they are citizens. Now they request rights, though that might have risks for them.”

This is the third of four articles on justice in Guatemala. The others are Quest for Justice, Calling on the International Community and Fighting for the Future.