Guatemala: Calling on the International Community 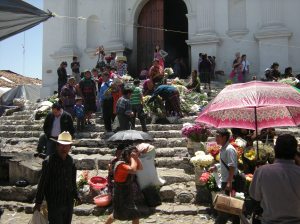 At Santo Tomas, a Catholic church built atop a Maya altar in Chichicastenango, worshipers use symbols of both cultures.
Photo by Barbara Borst

Guatemalans paid a terrible price for decades of conflict: 200,000 people dead or forcibly disappeared, the vast majority of them Maya civilians killed by members and allies of the armed forces.

Twice the country has called for, and received, international help, including through a program that continues today.

First published in February 2014 as the second in a series of four articles on tutawaza.com.

In the 1990s, the United Nations supported several years of negotiations between Guatemala’s leaders and the Marxist rebel movement Guatemalan Revolutionary National Unity. In 1996, the two signed the Agreement on a Firm and Lasting Peace. The UN deployed a verification and peacekeeping mission.

The accords covered difficult issues, including reintegration of rebel forces, resettlement of displaced persons, civilian control over the military, constitutional and electoral reform, socioeconomic and land issues, human rights and the rights of indigenous peoples.

“The peace accord was an amazing blueprint,” said Adriana Beltran, senior associate for citizen security at the Washington Office on Latin America. “Unfortunately, since the peace accords, there hasn’t really been a concerted effort by different governments and other sectors around establishing democratic institutions.”

Gert Rosenthal, Guatemala’s ambassador to the United Nations, said successive governments have failed to implement many of the 1,200 commitments in the accords. The former rebels converted to a political party, he said, but many members of paramilitary groups linked to atrocities “survived the peace accords” and turned to organized crime, particularly drugs.

Steps toward accountability for conflict-era crimes have been limited, despite two truth commissions. The first report, called “Guatemala: Nunca Mas” (Never Again), came from the Roman Catholic Church’s Recovery of Historical Memory project. It documented 422 massacres and found the army or paramilitary groups responsible for 47,000 of more than 55,000 human rights violations.

The church published its findings in April 1998. Two days later, Bishop Juan Jose Gerardi, a human rights champion, was beaten to death in a parish garage. Gerardi’s assassination is one of the few conflict-related cases brought to justice. In June 2001, three military officers were found guilty of his murder and sentenced to 30 years each in prison; a priest was found guilty as an accomplice and sentenced to 20 years.

The second truth commission, the Historical Clarification Commission, known by the Spanish acronym CEH, was formed in 1994 and later mandated under the peace accords. It found that “state forces and related paramilitary groups were responsible for 93 percent of the violations documented by the CEH.”

In its report, “Guatemala: Memory of Silence,” published in February 1999, the commission determined that some 200,000 people had been killed or subjected to enforced disappearance, and that 83 percent of the victims were Mayan.

The commission identified root causes of the conflict, including the elite’s violent repression of the poor and cold war involvement by Cuba, supporting the rebels, and by the United States, which fostered a 1954 coup and trained and armed the Guatemalan army throughout its years of brutality. The military, it stated, exaggerated the threat from the rebels and treated all Mayans as the “internal enemy.”

The report details massacres and other cruelties inflicted on indigenous Mayans. It then states: “In consequence, the CEH concludes that agents of the State of Guatemala, within the framework of counterinsurgency operations carried out between 1981 and 1983, committed acts of genocide against groups of Mayan people which lived in the four regions analysed.”

Genocide. For Guatemala’s victims and survivors, the word provides some recognition of their suffering. But there are others who dispute the term to this day.

“The country is still polarized regarding the conflict,” Mary Speck, a senior analyst on Guatemala for the International Crisis Group, a nonprofit specializing in political analysis, wrote in email. “The issue of genocide is especially contentious. Even those who reject genocide charges, however, often agree that those responsible for massacres, including the intellectual authors, should face justice.”

But few perpetrators have faced justice, Beltran said; instead, many of them moved into crime networks. The government had “ineffective institutions, a lot of corruption, a lot of infiltration by organized crime and criminal elements,” she said, adding that, by the early 2000s, such criminals were physically attacking human rights defenders.

Rosenthal said that judges and journalists, as well as human rights defenders, were under attack, and that criminal organizations were getting away with everything. Guatemala turned again to the United Nations for support, he said, asking for a commission outlined in the peace accords but not implemented.

In 2004, Guatemala and the UN signed an agreement for a Commission for the Investigation of Illegal Groups and Clandestine Security Organizations. Guatemala’s congress found it very intrusive, the ambassador said, and the constitutional court deemed it unconstitutional.

“Back to the drawing board,” Rosenthal said. The government and the UN worked out a plan in 2006 for the International Commission Against Impunity in Guatemala, known as CICIG. It was still intrusive, he said, but less so.

“But the intrusion was acceptable because it wasn’t the UN that asked to create” the commission, he said; the UN would support, rather than take over, the attorney general’s work. “The reason we did it was that we were fed up with the lack of response from domestic institutions” to the violent crime racking Guatemala, he said.

CICIG’s focus is on present day criminal organizations, rather than on the crimes of the conflict era, and on strengthening the institutions of justice, Rosenthal said. That focus has earned it widespread, though not universal, support in Guatemala.

Upper income groups and businesses that went along with government repression during the conflict now prioritize personal security and rule of law, he said. “They’re perfectly happy even accepting CICIG, but they don’t want to examine the past,” he said, adding that those attitudes parallel views in other post-conflict Latin American countries.

“Both for practical and for political reasons or tactical reasons” CICIG was not designed to go back to crimes of the 1980s, Rosenthal said. “But a lot of people who were affected by the tragic history do demand justice. They have not figured what to do with that very legitimate demand.”

This is the second of four articles on Guatemala’s quest for justice for crimes old and new. The others are Quest for Justice, Digging up the Past and Fighting for a Future. 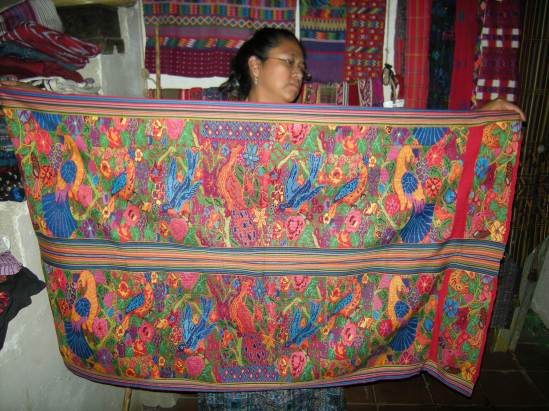 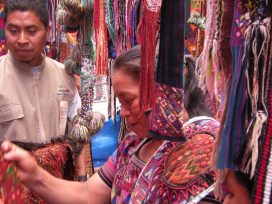 A guide and a vendor look through Maya weavings. 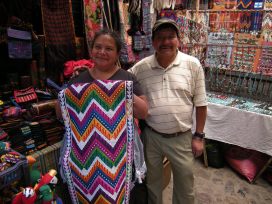 A wife and husband display wares in their stall at the Chichicastenango market. 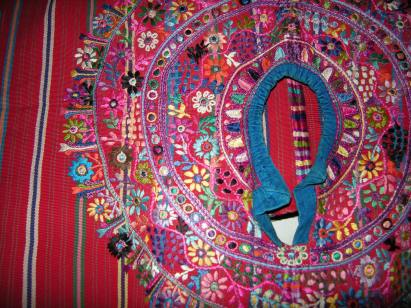 Embroidery surrounds the collar of a traditional Maya shirt. 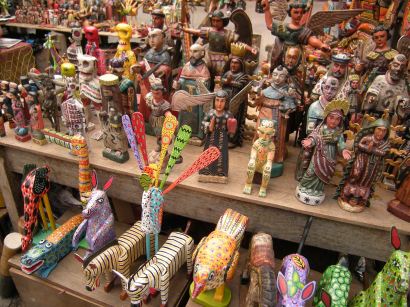 Angels, animals and other figures mix in the market at Chichicastenango.