Guatemala: Fighting for the Future 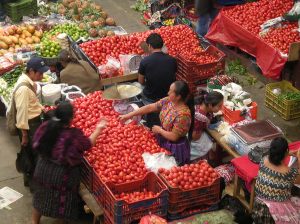 The market at Chichicastenango, a largely Maya town in the highlands of Guatemala. Photos by Barbara Borst

Justice in Guatemala faces a new challenge as a dynamic attorney general is told to step down in May.

Claudia Paz y Paz sits at the center of the struggle for justice in Guatemala. As the public prosecutor, or national attorney general, she has launched investigations and prosecutions that have put both drug lords and war criminals in jail.

First published in March 2014 as the final article in a series of four on tutawaza.com.

Many human rights advocates see her as the champion that Guatemala has long needed to fight rampant impunity for violent crime. But some people in Guatemala want to thwart punishment for crimes committed during the decades of civil war, and for the criminal syndicates that have rampaged through Guatemala since the conflict ended in 1996.

Two events illustrate the prosecutor’s predicament: In September 2012, the government sent a team of top officials, including Vice President Roxana Baldetti, to the United Nations to request a two-year extension of the international commission that bolsters Guatemalan justice institutions. In February 2014, the country’s Constitutional Court ruled that Paz y Paz must step down in May, at the end of the term of the prosecutor she replaced, rather than in December, after a full four-year term.

“We believe the Court’s ruling has done serious damage to the credibility of Guatemala’s justice system. Whether this damage can be undone will now depend in large measure on how the nomination processes for the attorney general and judicial posts are carried out. Unfortunately, there is good reason to fear that they will not go well. The stakes for Guatemala could not be higher.”

Masks in the market at Chichicastenango in Guatemala. Photo by Barbara Borst

The International Commission Against Impunity in Guatemala – whose extension Perez Molina’s government requested – issued a statement praising Paz y Paz for “her continued unwavering commitment – an imperative and historic contribution to Guatemalan justice.” The commission, known by its Spanish acronym, CICIG, stated:

“Under her leadership, the Public Prosecutor’s Office has managed to change and streamline investigation and prosecution techniques, providing the Guatemalan people with more timely responses to their needs. We remain firmly committed to the government of Guatemala and Guatemalan society in our tireless efforts to combat impunity and strengthen justice institutions.”

Praise for Paz y Paz was a major feature of interviews conducted over the past several months. Guatemala’s ambassador to the United Nations, Gert Rosenthal, said her appointment was one of the signature achievements of CICIG. The commission protested vigorously when the president appointed a candidate whom many thought was unqualified, or worse; the president removed that appointee and named Paz y Paz to the post.

“Public reaction was so fierce, the government had to backtrack,” Rosenthal said, adding that CICIG “was a determining factor in getting a very determined prosecutor who is very popular.”

CICIG has improved the professionalism of the country’s justice system, he said. The commission was designed to help Guatemalan institutions fight organized crime today, not to tackle human rights cases from the 1960-1996 armed conflict.

But Rosenthal said that the two problems are interlinked. The paramilitary groups that committed most of the abuses during the conflict era “survived the peace accords” and are now “mostly dedicated to criminal activities, mostly drugs,” he said.

In 1999, the UN-backed Commission on Historical Clarification detailed the conflict crimes. It found that the state committed genocide against the Maya people and was responsible for 93 percent of the human rights abuses; 160,000 people were killed and 40,000 disappeared at the hands of armed groups.

Paz y Paz has taken on some cases from the conflict era, notably by bringing former dictator General Efrain Rios Montt to trial last year. He was convicted of genocide and other crimes; however, the Constitutional Court annulled the verdict on technical issues. A new trial is expected in early 2015.

“Under Claudia Paz y Paz, there have been successful prosecutions of members of the ultra-violent Zetas cartel, considered a major threat several years ago. There have also been arrests of Guatemalan traffickers awaiting extradition to the U.S.,” she wrote in email.

Guatemala’s commitment to fighting impunity seemed strong when the country requested a meeting in September 2012 with UN officials and representatives of the governments that finance CICIG. The Guatemalan delegation included leaders of congress, ministries and the judiciary, as well as the vice president and the attorney general.

Ambassador Rosenthal noted in opening remarks that the government had never before sent such a high-level group representing all three branches of government.

Vice President Baldetti told donors that the money had been used effectively “so that we can put an end to impunity in our country.”

“We asked you here to let this child … named CICIG…grow in our country,” she added, speaking in Spanish.

The donor countries, which contribute about $21 million a year, agreed to extend CICIG’s mandate through September 2015. CICIG has recommended improvements in the justice system and police, backed creation of a special prosecutor’s office and a witness protection program, and issued reports on judge selection, trafficking in firearms and other issues.

Paz y Paz told the UN gathering that the presence of the government delegation “tells you that things are very different” in Guatemala compared with the impunity of old and “that the feeling that nothing can be done has changed.”

“Today, Guatemala lives in very different times,” she said in Spanish. “We have learned to trust ourselves and to work together.”

But with Paz y Paz soon to be forced out, Guatemala experts worry about how deep the changes go.

Marcie Mersky, director of programs at the International Center for Transitional Justice, said of Paz y Paz that it was “definitely part of the strategy to get someone honest” as attorney general.

“Any place where human rights are weak, how huge a role an individual plays,” she said, speaking before Paz y Paz was told to step down. “Whether these things add up to a long tendency of history for things to get better, I don’t know. That’s what I don’t see in Guatemala yet.”

Fredy Peccerelli, head of the Guatemala Forensic Anthropology Foundation, said Paz y Paz is making a big difference but that it remains hard to change the whole system.

“The people behind most of the atrocities (of the conflict era) stayed in power. That created crippling fear in prosecutors and judges,” he said.

“For the international community, the fact that Guatemala has been plagued by terrible violence and widespread impunity is not news. What is news is that the country’s justice system has finally proved itself capable of beginning to tackle these critically important cases.

“… But if, instead, the current attorney general and members of the Supreme Court are replaced by individuals who lack the competence, independence, and credibility needed to fulfill their responsibilities, the recent advances in promoting accountability and the rule of law could be halted or even reversed.”

This is the final article in a series of four on justice in Guatemala. The earlier articles are: Quest for Justice, Calling on the International Community and Digging up the Past. 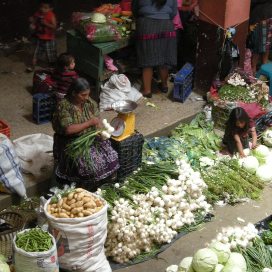 Vegetable sellers in the Chichicastenango market. Photos by Barbara Borst

A vegetable seller in the Chichicastenango market. Photos by Barbara Borst

Vegetable sellers in the Chichicastenango market.