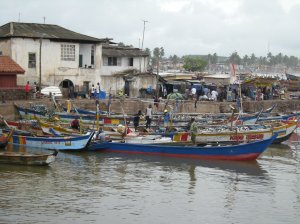 Sudden oil wealth sounds like a winning lottery ticket, but too often, it breeds corruption, economic dislocation and conflict.

In Ghana, citizen groups began pushing for accountability soon after oil was discovered off the country’s southwest coast in 2007, and they redoubled their efforts when the oil, and the cash, started to flow in December 2010.

First published in September 2013 on tutawaza.com.

Interviews with Ghanaian activists in 2012 revealed their determination to make the short list of countries that use natural resources to lift the whole society, not just enrich a few.

They are generating hope at home and abroad that this democratic West African country could be a model for breaking the “resource curse” in Africa. But, as recent interviews showed, they think it is far too soon to claim victory.

Richard Hato-Kuevor, who heads Oxfam America’s work in Ghana on extractive industries, said the country passed a good law, the Petroleum Revenue Management Act of 2011. The act allocates oil money for economic stabilization and for future generations, as well as for current use, but, he added, implementation is weak and “comprehensive, forward-looking regulations” are urgently needed as exploration and development expand.The Revenue Act established the Public Interest and Accountability Committee, whose members include tribal chiefs, civic groups, attorneys, academics, unions and business leaders, to monitor compliance and encourage public debate.

“This committee has a big role to play in terms of serving as a check on government,” Hato-Kuevor said, but government funds to run the committee are scarce.

Hato-Kuevor said Ghana’s government struggles to meet public expectations. Poor people, he said, “don’t get real benefits and don’t hear from (district) assemblies or chiefs” about whether oil wealth is used for the public good.

Isaac Mensa-Bonsu, plan coordination director at the government’s National Development Planning Commission, said Ghana’s economic growth rate shot up once oil production began. The country learned from successful resource management in Norway and in Trinidad and Tobago, he said, but, in some coastal areas, fishermen struggle and land speculation squeezes out the poor.

Because the oil is some 40 miles (60 kilometers) out in the Atlantic Ocean, few Ghanaians see its impacts. But Kofi Agbogah works with communities directly affected. He heads the Integrated Coastal and Fisheries Governance Initiative, known as Hen Mpoano, Our Coast, which receives funds from the U.S. Agency for International Development.Asked if accountability is keeping pace with oil development, Agbogah answered ‘yes’ and ‘no.’

“’Yes’ because we as a country recognize what others have gone through on the African continent, but whilst we are looking at revenue management, we are entirely forgetting about the environment,” he said in a Skype interview.

He listed a few of the problems: Fishermen barred from some waters because of oil production or killed in collisions with industry watercraft. Oil spills – small, so far – that pollute water and land, reduce the fishermen’s catch and may be a factor in recent whale deaths.

“You can see anger already on the faces of people from this side,” he said, and a sense that what’s urgent in western Ghana is easy to ignore 140 miles (225 kilometers) east in the capital, Accra. His organization has worked with affected communities for four years to help them make their concerns heard.

“We are catalyzing communities to have a voice,” Agbogah said. “Chiefs and kings are fearless” in speaking out about oil impacts.

Like Agbogah, Yakubu Zakaria sees pluses and minuses to the oil. Zakaria is director of programs for the Integrated Social Development Centre, ISODEC, a Ghanaian research and advocacy group.

“On a positive note, the new oil find has helped to catalyse Ghana’s economic growth in recent times,” he responded by e-mail, noting the 14 percent growth in 2011. International confidence in Ghana’s economy has spurred tourism, aviation, banking services and access to credit.

“Given Ghana’s unpalatable experience in the management of solid minerals such as gold, diamonds and manganese, and also given the poor performance of Nigeria and other developing countries in the oil sector, the government has displayed a great amount of caution and transparency so far in the management of the oil resources,” he wrote.

Ghana’s government has forged “a credible partnership” with citizen groups to monitor oil revenue, Zakaria said, adding that, so far, no corruption in oil management has been detected.

The negatives, Zakaria said, include lack of environmental impact assessments and “a euphoria and thirst amongst politicians for power” that has riven parliament since the December 2012 elections.

For Ghanaians both in high office and in affected communities, he said, the goal is to avoid “the Nigerian pitfall” – corruption, poverty and political conflict. ISODEC has brought together experts from Nigeria, Senegal, Trinidad and Tobago, and Norway to advise on policy. It is one of several civic groups that, with support from international donors, study oil impacts and help communities to cope.

The U.S. House of Representatives subcommittee on Africa held hearings in July entitled “Is there an African resource curse?” Mohammed Amin Adam testified about Ghana’s accountability efforts, which he helped spearhead.

Amin, who heads the Africa Centre for Energy Policy, mentioned the surging economy, $3 billion in 2012 oil exports and $541 million for the national budget. He acknowledged that others have called Ghana a new model for beating the resource curse.

“Ghana is indeed being tested, and whether she will pass the test or become another victim of the curse is still an open question,” he said. Hard lessons with its gold mines – pollution, human rights abuses, displaced communities and deaths at illegal mines – led Ghana to base oil policies on “public consultation and greater openness,” he added.

But parliamentary oversight is limited and other institutions are weak, he told the committee. Oil contracts are made public, but bids for land, mineral rights and other parts of the oil value chain remain secret. Speaking at Oxfam in Washington, he questioned whether Ghana is using oil money efficiently and effectively to promote lasting development.

Both Amin and Corinna Gilfillan of the advocacy group Global Witness urged Congress to implement U.S. laws on company payment disclosure and to support African human rights and accountability efforts.

Gilfillan, whose organization focuses on resource issues, said the U.S. “can help replicate the relative success in countries like … Ghana.”

By contrast, Tutu Alicante Leon told the committee about the dark side of the resource story – how oil wealth has helped entrench dictatorial rule in his native country, the Central African state of Equatorial Guinea.