NEW YORK – In the sea of pink pussy hats, waves of cornflower blue folded through the Women’s March on Washington, the day after Donald J. Trump was sworn in as president. 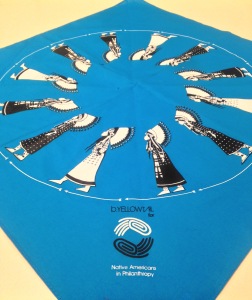 The scarf, designed by Bethany Yellowtail and John Isaiah Pepio, depicts the traditional women’s war bonnet dance. Women of the advocacy movement Indigenous Women Rise wore the scarf to identify themselves at the Women’s March on Washington. Photo by Clare Church

Although not included in the first phase of organizing the protest, Native American women wrapped blue silk scarves around their shoulders and made a powerful appearance at the Women’s March on Jan. 21. Their attendance was a moment of resiliency, but more than that, it was a show of expertise in the ways of resistance.

“We are the original resisters and the ultimate survivors,” Sarah Eagle Heart, CEO of Native Americans in Philanthropy, said at a panel discussion organized by Philanthropy New York on Feb. 2. Entitled Invisible No More: Native Realities in a Post-Election Era, the event brought Eagle Heart and other non-profit leaders together to discuss the new challenges posed by the Trump administration. From the beginning, the panelists made something abundantly clear: many of these challenges are not new to Native American communities. For centuries, indigenous peoples in the US and Canada fought against government oppression. Their continued resiliency against the Trump administration, then, shouldn’t be any sort of surprise.

The anti-Trump resistance movement, in fact, could learn from this history of protest. Earlier this month, the media network Indian Country released a report that shed light on this long record of resiliency in Native American communities. The report, Heroes of Native Resistance, details notable heroes, women warriors, and visionaries, who stood against the oppression of their people. The list of names includes the well-known leader Tecumseh, who resisted the takeover of three million acres of land in the 1809 Treaty of Fort Wayne, but also lesser-known heroes such as Chiricahua Apache warrior Lozen, who opposed the conditions of the San Carlos Reservation in Arizona in the late 1870s.

More recently, Native American resistance received national attention in the Standing Rock movement to oppose the Dakota Access Pipeline. The Standing Rock Sioux tribe and environmental activists protested for months on end, enduring violence and arrests, to protect the tribe’s water and land. Their tireless efforts brought initial success in early December. However, two weeks ago Army officials announced they would grant the final permit to complete the pipeline. And as of Feb. 22, North Dakota Governor Dough Burgum ordered the evacuation of the protesters. And yet, their movement and their resiliency, continue.

At the panel, Betty Lyons, president of the American Indian Law Alliance and member of the Onondaga nation, said: “What people always seem to forget is that we are resilient.”

The panelists, in early February, urged community organizers and board members to include Native Americans in the mounting resistance against the Trump administration. Although LaDonna Harris, founder and president of the advocacy group Americans for Indian Opportunity, was named honorary co-chair for the Women’s March on Washington, Eagle Heart said that Harris’s invitation was late in the overall organizational process. Moving forward, Eagle Heart said, Native Americans “need to be at the table from the beginning.”

For example, in the non-profit sector, often considered to be a critical component of the resistance, Native Americans are underrepresented in funding and in leadership positions. “Native people are often not represented on foundation boards,” Eagle Heart said. “In fact, we have less than three (members of foundation boards) represented nationally.” Despite the fact that Native Americans account for 2 percent of the population, funding for their communities is less than 0.3 percent of annual foundation grant dollars, according a report by Foundation Center.

Edgar Villanueva, vice president of programs and advocacy at the Schott Foundation for Public Education, and another one of the Philanthropy New York panelists, wrote about this disparity in non-profit representation. “When foundations seek to diversify their staffs, they often look to hire talent from populations that benefit from their funding,” he wrote for Philanthropy News Digest. “Very few foundations focus their giving on Native American populations, so hiring Native staff may not be seen as a priority.”

Despite this, Native American voices are sorely needed on foundation boards and organizing committees relating to sexual abuse, climate change, and poverty. In these areas, Native communities are disproportionately affected. For example, one in three Native American women report being the victim of attempted or completed rape in their lifetime. This startling statistic means that Native American women are twice as likely to experience rape as compared to all other races. At the Philanthropy New York panel, Lyons said of this abuse: “It goes unnoticed, because we go unnoticed.”

Patricia Eng, vice president of strategic partnerships for the New York Women’s Foundation, said that making realities like these visible “is one critical step for making this country whole.” One way to increase this visibility is to give Native Americans a seat at the table, as Eagle Heart says, from the beginning.

If the Women’s March on Washington was any indication, the tides of representation for Native Americans may be turning. The silk scarves, created by fashion designer Bethany Yellowtail, were worn for visual representation and identification among the more than 500,000 protesters. Participating and being visually distinguished in the March, according to Indigenous Women Rise, ensured that “our [Native American] voices on issues that affect us all, are resoundingly heard.”

The blue scarves, and the resilient women who wore them, reminded the Women’s March protesters not only of some under-discussed issues, but also of the knowledge and power of Native American communities in times of resistance. As policy makers and organizational boards consider the symbol of the pink pussy, so, too, should they look to that cornflower blue.