By Thalia Beaty and Kavitha Surana —

KARLSRUHE, Germany – Ruth Stephan stood outside an abandoned cafeteria repurposed as a temporary shelter for asylum seekers on the northern campus of the Karlsruhe Institute for Technology (KIT). While a long line of men waited tensely in the cold to receive a monthly stipend from the government, she kept her eye out for an Ikea truck. 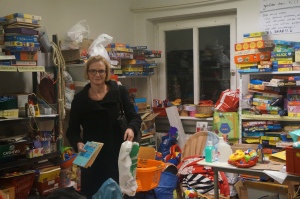 Ruth Stephan, an administrator at Karlsruhe Institute of Technology and lead organizer of Refugee Aid at KIT, in the supply room at the shelter for asylum seekers on the university’s eastern campus. Photo by Kavitha Surana

An administrator at this major science and engineering university in the state of Baden-Württemberg, Stephan is a lead organizer for Refugee Aid at KIT. She is one of thousands of volunteers who have stepped up as Germany’s usually well-ordered asylum system sinks under the strain of more than one million asylum-seekers who poured into the country this past year. And the number of new entries has not slowed significantly – in January alone 50,532 people applied for asylum, an increase of 133.1% from the previous year.

While these people wait for a decision on their cases, the local government in Karlsruhe is responsible for providing them with shelter, food and health care. But that is where its mandate stops and volunteers step in. A spokesperson for the Karlsruhe Regional Council said in an emailed statement that volunteers organize all other support for asylum seekers from language classes to childcare, sports and social gatherings. Volunteers “invest a lot of time and heart into their projects,” the spokesperson wrote, and they contribute significantly to making asylum seekers “as comfortable as possible.”

In many cases, volunteer initiatives from civil society are the most consistent and important contact that asylum seekers have with German society for months or even years.

“You have the civil society that is doing work for free for the government,” said Alex Janda, who, until recently, was a clothing coordinator for Refugee Aid at KIT. “Work that normally is the task of the government in my opinion – like, for example, to give the people clothes. But it’s not possible at the moment, so the civil society has to do it.” Janda now runs a welcome project sponsored by the European Union at the organization Refugee Aid Karlsruhe.

The Karlsruhe Regional Council spokesperson said it strives to find former hotels or apartments with separate rooms and bathrooms to shelter asylum seekers. But in September, it designated the shuttered cafeteria at KIT — which had no water, electricity, Wifi or even showers hooked up at the time — to host 500 asylum-seekers starting the very next day. Families are on one open floor, and single men on the other.

Even by November, the facility was only partially prepared: two Syrian men staying there said that while there were rooms inside that might be used for activities or common areas, those were still locked. So volunteers, some of them led by Stephan, kicked into action and got permission to set up a prefabricated unit on the grounds in front of the building.

Now, Stephan was expecting the Ikea truck to deposit donated materials for the small container facilities, so that she could organize German classes and children’s spaces, all to be run by volunteers. There is no telling how long the cafeteria will shelter asylum-seekers.

In January, the Federal Office for Migration and Refugees reported an additional 371,754 pending asylum applications nationally. This backlog means longer wait times for a decision, but according to Janda, Syrians specifically have a good chance to be processed within four months.

Stephan said she began her volunteer organizing in fall 2014, when the regional government decided that the university, which is a public institution, would begin to house asylum-seekers.

“I heard a lot of my colleagues say, ‘We don’t want them here,’” Stephan said. “And as an international university, I was ashamed. I said I will do something to bring refugees together with my colleagues.”

Now the group that began as barely 100 people has grown to more than 2,000 volunteers, many of them students at the university. Most recently, Stephan helped organize an initiative to send volunteers to welcome refugees at the main train station, in partnership with a charity that provides social services in the railway station. Karlsruhe is the main hub for registration in the state of Baden-Württemberg, but when newcomers get off at the train station, they need directions and assistance to make it to the main registration camp.

“It’s not so easy to understand our trains and our trams. It’s a very complicated network,” says Stephan. For example, “the way you have to use a ticket – if you have to stamp it or if you don’t have to stamp it.” So, her volunteers identify new arrivals and guide them in the right direction.  For newcomers, details like this make the difference between a welcoming introduction to Germany and confusion that sometimes feels like a personal attack.

Basil, an asylum-seeker from Kafranbel in Syria who did not want to give his last name because of his vulnerable asylum status, has been waiting to register at a massive tent shelter also on KIT’s campus for two months along with his wife and 6-month-old son. “Karlsruhe, from the outside, is nice. The people are good,” he said. “But in this camp, you feel like you are under military rule.”

Mara’a, his wife, said that when their son fell sick with a virus, easily spread in the crowded conditions, they felt desperate. Eventually, a volunteer doctor gave them medication, and as a result, she said their impression of the German people is that they are “very caring and humane.”

This is precisely Stephan’s concern: that unassisted, the overwhelmed asylum system will leave new arrivals out in the cold. “We have tried to make the refugees feel welcome,” she says. “But we cannot wait until the asylum process is finished to do this. I think then it is much too late.”

Still, building a sustainable and responsive volunteer network is not easy, especially because these groups often do not have the authority to commandeer facilities for activities or even storage. “Organizing the volunteers is becoming more and more complicated. Because, I mean, how can you have a doodle list with 1,000 people?” said Janda, referring to the online calendar-organization system.

She recalled a woman who woke her up at seven in the morning with no notice, wanting to drop off a van full of used clothes. The facilities for donations were full, leaving Janda to stuff the bags of clothes into her apartment.

“I think the responsibilities of the volunteering people are a bit too high at the moment,” Janda said. “The numbers [of arrivals] are exploding.” In 2015, the state of Baden-Württemberg processed 61,671 asylum applications, the third most among Germany’s 16 states.

Still, volunteers are often highly-motivated to make a difference in helping newcomers settle and integrate into an unfamiliar – and sometimes hostile – landscape. In Linkenheim, on the outskirts of Karlsruhe, asylum-seekers who have already registered live in identical container shelters. Abutting the quiet residential streets of this sleepy hamlet, the camp is home to about 125 people from Nigeria, Albania, Gambia and Syria who are waiting for decisions on their asylum applications.

Children play foosball outside the containers that house asylum-seekers in a refugee camp at Linkenheim, Germany. Photo by Kavitha Surana

Technically, the local government runs the camp, but its only staff is an employee who sits behind a desk in one of the bright yellow cargo containers. Otherwise, the life of the camp is organized by volunteers like Beate Habic, a tall woman who still recalls her mother’s stories of fleeing Yugoslavia as a refugee during the Second World War.

Until recently, she spent her days taking care of her home and family, but now she is the center of the volunteer group that attends to everything supplemental in the camp: the foosball table and toy cars for the children, the cooking parties with Syrian men and German families, and efforts to organize language and swimming classes. The group operates out of a single container, which boasts a chalk board, some chairs and a couple of basic musical instruments.

Habic’s goal, in addition to cultivating a social life in the camp, is to help the neighboring community adjust to the foreigners’ unexpected presence. “Some people in Linkenheim, they have fear of the refugees,” she said. “They don’t know them, and normally, what you don’t know can make you fear.”

The night before a welcome party for newly arriving refugees, someone scrawled “Syrians go home” in chalk on the road leading to the camp. But Habic doesn’t get discouraged. She shows up to anti-immigration protests and tries to talk with people, or responds to negative comments on Facebook, inviting people to come visit the camp. Some of them take her up on it and are surprised at what they see.

“Always, it’s the same reaction: ‘Oh, I did not know that it’s like that,’” she said. She remembered one woman who wrote negative comments on Facebook, but responded positively once she saw her own child playing with refugee children in the camp.

“Children don’t have problems. They don’t know things about black and white and religion, something like that, rich or poor,” she said. “Children are children, they make contact very easy,